It’s been two months since my grandfather, who my siblings, cousins, and I affectionately call “Papa”, passed from this earth to eternal life. I’ve been MIA from my writing as I processed all that happened.

When Stephen, Avery, and I moved from Virginia to the San Francisco East Bay two and a half years ago, Papa was one of my only family members in the area, other than my Aunt and Uncle in Point Reyes. He was the closest, at an hour without traffic. I wasn’t able to see him as much as I would have liked (sick and pregnant with twins and a three year old, then the twins arrived and chaos ensued). Still, I’m so grateful for the times I had with him, and the time my children spent with their great-grandfather. Papa was a great man. Although others have written the story of his life, I would like to tell the story of his death, since I was chosen to be present with him when he entrusted his soul into the arms of Jesus.

Papa spent his final years in a lovely retirement home in San Rafael, CA, where he charmed the residents and staff who served there alike. He declined quickly this summer beginning in June. I actually received the news while in Montreal directly after praying for him at the tomb of St. Brother Andre. I had never heard of St. Brother Andre, and I actually didn’t even know I was going to visit the tomb of a saint! I simply wanted to see the famous and majestic St. Joseph Oratory and hopefully attend a daily Mass there. God had even better ideas though, and it was truly a blessed and grace-filled day – a pilgrimage I didn’t know I was embarking on until I was making it. When I returned to California, I visited Papa as soon as possible and annointed him with the oil of St. Joseph that I received in Montreal, and left a medal of St. Brother Andre by his bedside.

By mid-July, Papa was in hospice, and I received word on July 17th that he was in his final days, maybe his final hours. As the only member of my side of the family on this coast, I knew I had to go to him. My amazingly supportive husband left work immediately and took over caring for the children, while I jumped in his old truck and began the drive northwest. I prayed the whole way for Papa and for my family. I have to confess that, since I’ve been “out west”, I’ve felt rather unsure of my purpose out here, and I often feel that I am in a state of waiting until we can move back closer to home. But as I drove and prayed, I heard God’s voice in my heart telling me: this is why I brought you out here. It was one of those rare realizations where time pauses and God lets you glimpse clearly a small part of his amazing plan. I felt like a spiritual EMT in my Tacoma ambulance, rushing to his side, with the sole purpose of praying the Divine Mercy Chaplet at his deathbed. However, I never expected to be the only person with him, holding his hand when he died.

When I arrived at Alma Via, I found my Aunt, Uncle, and cousin in the lobby. My aunt, who had tirelessly cared for him since his move to California four years ago, came up with me to his room and introduced me to the hospice nurse. He had been unconscious since the evening before, and I waited while several of the staff there came to lovingly kiss him goodbye before going home after their shifts. Then everyone left and I was alone with him; his oldest granddaughter come to say her final goodbye.

Knowing that my east coast family, especially my mom (his daughter), may not arrive before his passing, I told him how they were all on their way, and how very much they each loved him. Then, I got out my rosary, took Papa’s hand, and prayed the Chaplet of Divine Mercy through my tears. All the while I watched his ragged breathing, which occasionally would pause, and I wondered if each one would be his last breath. I finished the Chaplet and prayed to our Lady with a Hail Mary, entrusting him to her and asking for the Holy Spirit to annoint him. I also said a prayer to his guardian angel. Then, having completed the task I had been given, I let go of his hand because I had nothing more to do. Or did I? A few seconds later, I noticed his breathing had slowed and become even more ragged. I took his cool hand in mine again as my tears fell, and I questioned if I should go and get my Aunt in case this was “it”. But I couldn’t leave him alone. So I held his hand, and I watched him take his last breath. I have no doubt that the Holy Spirit was at work, and the prayers and words I was able to say at his deathbed must have been what Papa needed to let go and entrust his soul to our Merciful Jesus.

After this experience, I did some further reading on the Divine Mercy Chaplet and its significance when prayed in the presence of the dying. Although I obviously knew it was very meaningful, I didn’t know the extent of it. In St. Faustina’s visions of Christ as Divine Mercy, Jesus Himself told her, “when they say this chaplet in the presence of the dying, I will stand between My Father and the dying person, not as the just Judge but as the merciful Savior” (Diary, 1541). Again He said, “At the hour of their death, I defend as My own glory every soul that will say this chaplet” (Diary, 811). I know that Papa was saying this chaplet in his heart with me. After all, some of his final words were uttered as he pointed to the crucifix, which had been moved from above his bed to the wall in front of him so he could see it. He pointed at Jesus and said “that’s my friend”.

I am so incredibly grateful and completely humbled to have been chosen to help birth my grandfather into Eternal Life. I am in no way worthy of such a task, but God loves to choose the little and the weak to carry out his plan. All of us are called to participate in God’s plan of salvation – including you. You may feel like you are wandering without purpose at times, not knowing what God is calling you to do, perhaps feeling that you don’t have much to offer. Stay faithful and open, and keep showing up to prayer and the sacraments. God will show you how He wants to use you in His time. And it will be glorious. Just trust Him. Repeat after me (or better yet St. Faustina and St. John Paul II): Jesus, I trust in You!

To learn more about the Divine Mercy Chaplet and praying it for the sick and dying, just follow this link. To listen to a beautiful sung version and pray along, click here.

A little about me … 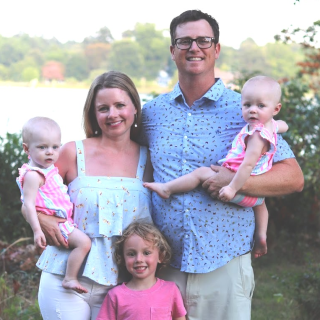 Hello, I'm Kelly! I’m a Catholic woman married to a handsome scientist and mom to a fun-loving boy and identical twin toddler girls. Once upon a time I studied Theology, and hold an M.T.S. from the Pontifical John Paul II Institute for Studies on Marriage and Family in Washington DC. I’m a Virginia girl at heart, but my family lives in the San Francisco Bay area and has fun packing up our chaos to explore the outdoor beauty of NorCal whenever we have the chance. I write about applying my theology background to life as a domestic church, a.k.a., Catholic family. I hope you find some joy and inspiration in these pages!